How my mental health struggles shaped my latest project

This story is going to be very personal. I guess that's okay.

A few years ago I was very unwell. I was at the university, after moving to the UK on my own, and then moving between cities trying to find my place. I made some friends but didn’t feel close to anyone, which was mostly because I was (and still am) really good at isolating myself. The only person I could talk to honestly was my partner, who, however, lived in a different city. Our relationship was slowly crumbling anyway, so it wasn’t the best source of support after all. During that time, I had another period of bulimic episodes, depression was controlling my life, and panic attacks were my regular visitors. I was in a bad place.

Whilst some people knew about my depression and anxiety, I had never told anyone about my eating disorder. I probably didn’t even know it had a name. At one point, my partner realised I had been purging, and confronted me about it. It wasn’t an easy conversation. I felt ashamed and exposed, but at the same time somewhat relieved. I wasn’t alone anymore. I could talk to someone. She tried to be supportive about all my problems, but we were both young, uneducated, and inexperienced. We didn’t know how to handle it. There were times her words hurt or triggered me when all she wanted was to help. It was hard and we were slowly drifting away, whilst I was spiralling down.

Thinking about it now, it’s quite difficult to understand why I didn't go to a doctor or try to get help. But truth to be told, I didn’t know I could. Where I grew up, things such as mental health, therapy, and support systems weren’t really common knowledge, and so you’d only think about them in terms of really serious stuff. My problems, of course, "weren’t all that serious after all". And so I tried self-help methods I found online. Routines, journaling, exercise, gratitude practice, meditation. I’d try, and try, and try.

Some things were more helpful than others. Some were mentally painful. I remember trying to practice gratitude and trying to find positives in my life when I felt the most hopeless. Sometimes, I’d write down that I felt proud for not purging that day. It was a big achievement. I wanted to share it with someone, but that made me feel even more lonely. None of my friends knew that I had a problem in the first place. The thought of telling my mom terrified me. The only person who knew was said partner, who I definitely didn’t want to bring this up with. My tiny moments of achievement were overshadowed by this deep feeling of loneliness. And so it continued.

I managed to find some solace in online communities. It’s easier to open up to strangers, and there are places where pretty much everyone experienced mental health problems, so they don’t ever judge you. These places, however, can become triggering, when you’re not careful. It’s like entering people’s minds at their darkest times. It sucks you in and leaves you hollow. Still, it was a safe space for me.

It was back then when I thought it would be amazing to be able to practice gratitude in such a safe space, with people who get it. Not getting fake claps from friends who quietly wonder ‘what’s so difficult about it?’ when I tell them about my achievements. Not being judged for revealing my weaknesses in the first place. Simply just gathering with others who have been through similar things, and can genuinely appreciate how hard it is sometimes to just get out of bed in the morning.

This is when One a Day was born. My concept for a platform where we can all support each other on our way to recovery. It is based on gratitude practice and the idea that just one positive thought a day, can lead to a lasting change. It took me a few years until I learned the technical skills to create it, and, more importantly, became confident that I can make it happen. It took me a few years of therapy, relapses, and studying these things to get better, or at least well enough to try and help others. From my own experiences, I know that dealing with mental health stuff is awful for anyone, especially when you’re left on your own. That’s why I want this to happen. So we don’t have to face it alone anymore. 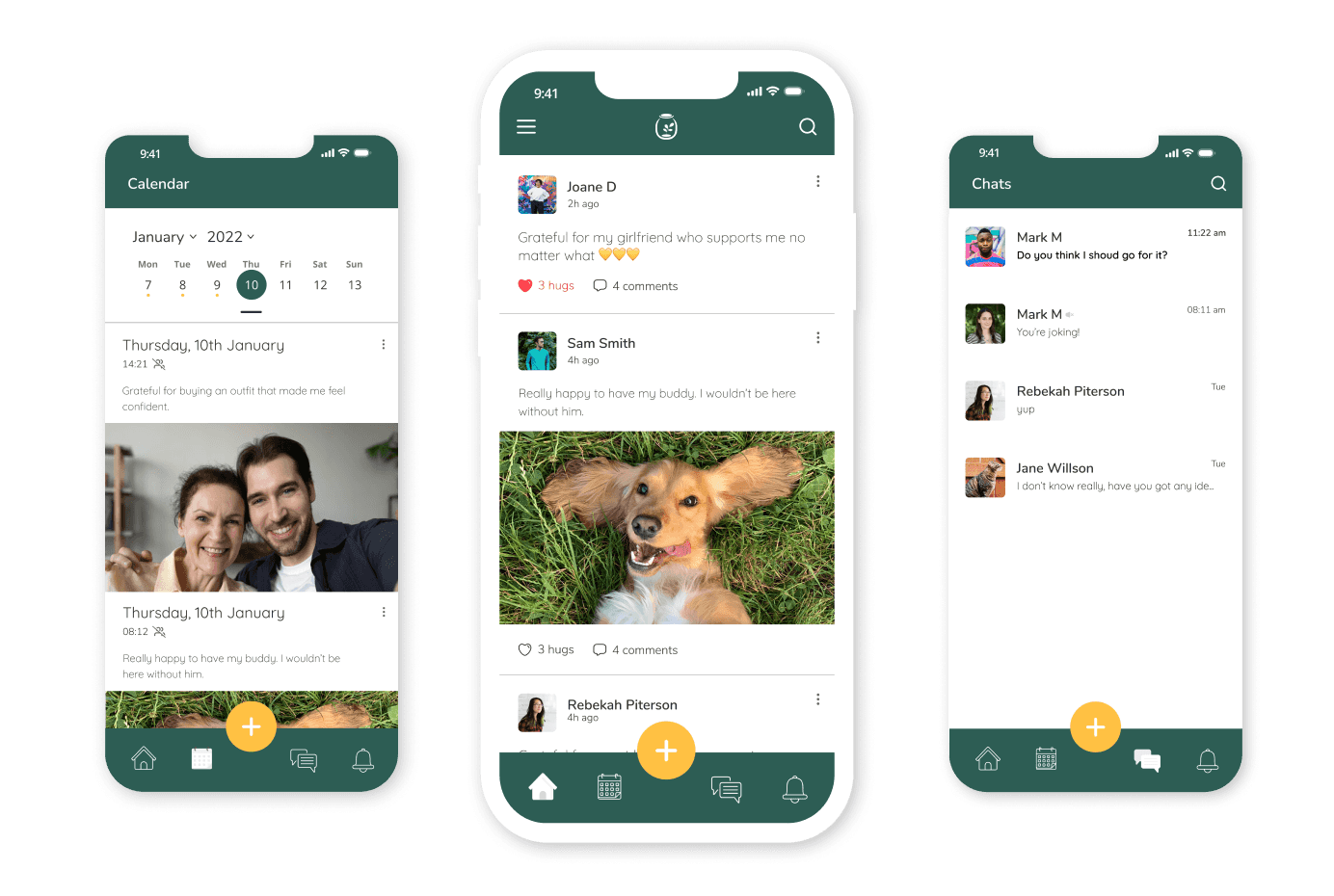 The first version of the app is ready and is currently being tested to find any issues. I will release it within the next two months. It will allow people to post their daily gratitude posts and share them with others, who can offer their support. It would mean the world to me if you could share your feedback on the idea, and/or the app when it comes out. If you’re willing to do that, please sign up on this page, or follow me on Twitter, where I will post more updates about this project.